Import VV file : No answers could be mapped

Less More
3 years 3 months ago #151099 by blocka
Import VV file : No answers could be mapped was created by blocka
I have an existing survey that has responses associated with it. I went to Responses and exported responses using VV format.

I have used the Copy Survey in LS to create a new survey, and then activated it. I then went to Responses, and I selected to import responses from my VV file I created above.

Leaving all settings as default in the VV import screen, when I try to import the data from the VV file, I get the message:

Can someone explain to me why no answers could be mapped, when I'm using exactly the same survey structure in both surveys?

Less More
3 years 3 months ago #151102 by jelo
Replied by jelo on topic Import VV file : No answers could be mapped
Perhaps you can change the settings for the VV import.

To check for survey issues create a new survey with 1-2 responses and copy that survey.
Try a VV export/import. Same issue?

What database/version is used?
The meaning of the word "stable" for users
www.limesurvey.org/forum/development/117...ord-stable-for-users

Less More
3 years 3 months ago #151314 by DenisChenu
Replied by DenisChenu on topic Import VV file : No answers could be mapped
More information needed : when export did 'New VV format' is selected ?
Assistance on LimeSurvey forum and LimeSurvey core development are on my free time.
I'm not a LimeSurvey GmbH member, professional service on demand , plugin development . I don't answer to private message.

I have had exactly the same issue as the original poster, and I do have some additional information on it.

The way the problem started for me is simply that I did a VV export from an active survey (with the Latest VV version option), cleared the list and then tried to re-import. The import failed with the messages:

Then, I created a copy of the survey and lo and behold -- I could now import the VV file into the new one!

The problem, however, was that I needed the new survey to have the same ID as the old one, so that the people who had the link to it could still use it. So, I deleted the original survey and once again created a new copy (from the FIRST copy) and gave it the old ID. Unfortunately, this did NOT work, as importing the VV file produced the same errors as before.

I thought the issue was associated with that old survey ID, so I created yet another copy, this time letting the system pick the ID, and again, no joy.

So, to summarize, only the first copy that I made of the survey is working properly. The original and any subsequent copies fail the VV import with the above-mentioned errors.

I have also attempted the following:

1. I compared the survey structure export files from the copy that works and the one that doesn't, and they are identical, except for the survey ID.

2. I thought the problem might be caused by some particular question, or perhaps some particular record. So, I eliminated all but one records from the VV file, and then went through the exercise of eliminating the questions from the survey one by one, until I only had a single question left --a short text-- and I was still getting the error messages when trying to import.

3. Recreating the survey from the structure export file also does NOT work -- the VV import fails on the resulting survey.

5. Also, with my other surveys (some of which are very large and complex) VV export-import DOES work. So far, the problem has been with only a single survey -- and it is a relatively simple one, with just 7 or 8 questions.

So, basically, it seems that when a survey goes bad, it stays bad no matter what you do, except that in just ONE case, I was able to clone it and the clone did work (but I was never able to do it again successfully).

That's all I can report for now. If you want, I can send you the survey structure export and the VV file, so you can look at them.

I saw that CALC preferred to save it as true CSV - with comma as delimiter. However the exported file had TAB as delimiter. Once I fiddled with "Save As" options in CALC (using tab), then I could import without problems - even with only partial answers.

Less More
2 months 3 weeks ago - 2 months 3 weeks ago #196788 by Sweden
Replied by Sweden on topic Import VV file : No answers could be mapped
I also have this problem with all surveys (LS Version 3.22.7+200225) and have now tried everything I could think of. Is this a general problem?

Even the most simple survey with only one yes/no question results in the "Import failed: no answers could be mapped" message (tried exporting one response from the survey and importing into the same survey right after). All the different import options that are available result in the same message... also tried survey with and without tokens, but same result. CSV file looks fine (TAB as delimiter doesn't make any difference).

Any suggestions?
Last edit: 2 months 3 weeks ago by Sweden.

Less More
2 months 3 weeks ago #196789 by Joffm
Replied by Joffm on topic Import VV file : No answers could be mapped
No, suggestion,

but I just tried in 3.22.2.
Exported to vv.
Then imported this file again (with these settings) 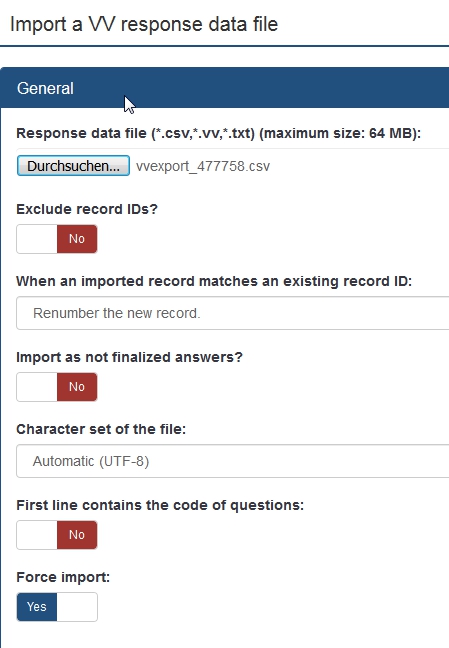 Everything was fine.
I could think of "character set". Or?


You might send your simple one question survey and the vv export; so we are able to check.

Less More
2 months 3 weeks ago #196790 by Sweden
Replied by Sweden on topic Import VV file : No answers could be mapped
Many thanks. Your screengrab is very helpful because I see that your file starts with vvexport... I used the "Export responses" option instead of the "Export a VV survey file". When I use the VV survey file option, results are imported just fine.

What I find strange is that I can put a checkmark next to a response and then export via the "Selected resonse(s)" menu below (or via the "Export responses" from the top popdown Export window). That is fine, a csv file is saved, but how do I import it? I thought it was the "Import a VV survey file" (because it accepts csv-files)... I guess that explains why it fails.

My question is now - isn't it possible to export and import just one response?

Less More
2 months 3 weeks ago #196863 by DenisChenu
Replied by DenisChenu on topic Import VV file : No answers could be mapped
Force import must be uneeded !

If needed : something are broken , i use VV export/import on 3.X a lot (and really need it) i NEVER activate force import.
Assistance on LimeSurvey forum and LimeSurvey core development are on my free time.
I'm not a LimeSurvey GmbH member, professional service on demand , plugin development . I don't answer to private message.

Less More
2 months 3 weeks ago - 2 months 3 weeks ago #196868 by r0bis
Replied by r0bis on topic Import VV file : No answers could be mapped
What I would do - export in VV, identify the response you are interested in, delete others. Better yet - if you need to change just one response, you can just edit it directly in lime survey.

What I have done before - I have exported all in VV format, made the changes (add new records), deleted all responses in limesurvey (batch delete) and then imported the VV file.

As to LS behaviour on export -it makes perfect sense - there are two different formats with 2 different names. Export CSV means export results with the idea you will be analysing them en Excel, R or any other program. Export VV - even though is in structure a CSV file (plain text data file - very commonly used to transfer data across systems), but the purpose for that VVV file is to be transferred to another limesurvey installation (with an identical survey in place) or for results to be edited and re-imported. If you have ever done any importing of data into a database (e.g. access, mysql, postgres) you will know that even small differences in format can make it impossible to read in data - therefore you cannot expect to read in where VV is expected a response CSV export. Limesurvey runs typically on mySQL backend. I hope this helps. Good luck.
r0berts
Last edit: 2 months 3 weeks ago by r0bis. Reason: clarity
The following user(s) said Thank You: Sweden

Less More
2 months 3 weeks ago #196874 by Sweden
Replied by Sweden on topic Import VV file : No answers could be mapped
Thanks a lot, to all of you, for your help.

I know I shouldn't use "force import" - I guess it was selected for troubleshooting and the screengrab helped me understand that I was exporting/importing the wrong way...

What I find a bit strange is that I can select and export specific responses, but only as a csv file, and then I can't import them again (not even to the same survey). I have to use the "Export a VV survey file", if I want to import responses again to the same or another survey. However, that doesn't give me the option to only export selected responses. It's either "Completed responses only", "All responses" or "Incomplete responses only". Would be great if you also here could choose "Selected responses".

1. Set answer and question to code
2. Use ExpressionScript code: to ON
3. Replace all line feed in CSV file by {newline} and quotes: manual.limesurvey.org/Import_responses#Reserved_names
4. When (VV) import : check " First line contains the code of questions:"

It work for me
Assistance on LimeSurvey forum and LimeSurvey core development are on my free time.
I'm not a LimeSurvey GmbH member, professional service on demand , plugin development . I don't answer to private message.