Take an answer with more mentions

I tell you that I have a problem that I have not been able to solve, that's why I approach the forum to see if someone has had the same problem.

I have a multiple answer question where I show the possible products or categories that you have bought in the last few months.

P1. Which of the following categories have you bought in the last few months?

Then in a later question it is asked in which supermarkets you have made purchases of these categories, so I have a list of 18 possible supermarkets where they could have bought these categories and I have separated each category in a variable to better show the list of stores in a radio response to select a store by category

Now the dilemma is that I should ask for the supermarket that was most mentioned in question 2.

Why do you mostly shop at...

So I only need to drag the text of the store that was selected the most in the previous set of questions.

I hope I have been clear in my wording.

I also leave you an example with a test equestrian in case someone has gone through something similar.

Greetings to all and thanks for reading.

So I only need to drag the text of the store that was selected the most in the previous set of questions.

Yes, only.
But first you have to calculate the maximum, see which store(s) are affected, deal with ties, ...

I'd do it like that (only using some equations)

3. We may get more than one store with the same frequency (as shown above). So we select one at random.
First create a random number from 1 - the length of "eqStores" (the number of stores with the same maximum frequency)
Using functions "rand" and "strlen".
equation called "eqRand"
{if(is_empty(eqRand),rand(1,strlen(eqStores)),eqRand)}


4. Now we grab the character from "eqStores" that is in this position "eqRand".
Using function "substr".
equation called "eqStore"
{substr(eqStores,eqRand-1,1)}

Of course: All these equations are hidden after testing. 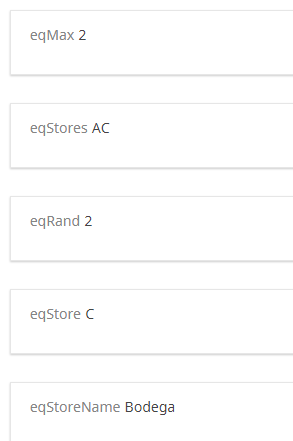 6. The your question looks like
Why do you mostly buy your products in {eqStoreName}?

By the way:
How do you imagine to deal with your "Other"?
1. You have to include the Code "-oth-" into the calculation.
2. You do not know which store it is.
Let's explain:
You get a frequency of 13 "Others", which is the maximum.
This might be one single "other" store.
But also there might be 13 different stores inserted, so that each of these "other" stores only was mentioned once.

Thank you very much for sharing your knowledge,

I tried to import your example into my version of LS to see if I could understand a bit more about what you mentioned.

I'm a bit distracted and forgot to mention the version.

I offer an apology in advance.

I'm a bit distracted and forgot to mention the version.

You did not forget, you removed these questions

I have no idea why people ignore them.
We do not ask them "just for fun".

It will take some time to create it again in version 3.x.

Less More
5 days 19 hours ago #230966 by Joffm
Replied by Joffm on topic Take an answer with more mentions
Here a version 3.x. export.

Included are two ways to calculate this (I mentined this before).

You only have to extend the equations "countif(" to your 18 P8da questions and decide which way you prefer.


And don't forget about the "Other" stores.

You did not forget, you removed these questions


But Joffm, he/she put a heart in the subject!


@Joffm: You are just too good for this world.
I answer at the LimeSurvey forum in my spare time, I'm not a LimeSurvey GmbH employee.
No support via private message.

@Joffm: You are just too good for this world.

And I saw the heart, but too late.

Thank you very much, I have imported the survey and adjusted the questions for the 19 categories.

I already did a real test with a full survey and this works great.

I agree with @holch, you are too good.

I really appreciate the help and in future topics I will not discard my version.

Less More
1 day 2 hours ago #231030 by heliousgeorge
Replied by heliousgeorge on topic Take an answer with more mentions
All clear and reasonable thank you ! Good luck to you

I answer at the LimeSurvey forum in my spare time, I'm not a LimeSurvey GmbH employee.
No support via private message.

@heliousgeorge: I am watching you...

LOL!
Cheers,
Tony Partner
Solutions, code and workarounds presented in these forums are given without any warranty, implied or otherwise.