Default answer for dropdown list - not getting it to work

After trying and comparing things, I couldn't figure out how I can get a simple scenario like the Limiting Max Number of Responses in Survey Using a Hidden Question example.

Basically, I want to reproduce that little example. However, aside from importing it into Limesurvey, I can't figure out how to set up the default value so that the quota increases silently after each submission.

I've tried on 3 different installations, including the demo one. The problem seems to be coming from the 'Edit default answer values', which shows a one-list choice that can't be exploited later on.

This is how it translates (logically) in the web interface: The demo instance brings up an error message when loading the question. But I don't understand why.

I don't see any way to correct/ override the default value, which is just a drop-down selection in the web interface.

I am trying to figure out what it is that I am missing... or if I'm hitting a bug?

I got it working from the sample, but I would love to be able to do this on my own...

Works as expected in 3.x.

But I do not know why a hidden question of type "drop-down" is used. 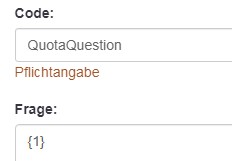 And the quota definition

Less More
5 days 16 hours ago #217164 by Jean38
Replied by Jean38 on topic Default answer for dropdown list - not getting it to work
Oh, I didn't realise I could use an Equation for this. I got carried away following previous threads and Limesurvey manual, didn't even think of it as an option.

It's a better and more straightforward alternative, too!

Joffm wrote:
But I do not know why a hidden question of type "drop-down" is used.


Because in a dropdown : you can have more option than Y/N

In 3.X : only dropdown and checkbox are allowed for Quota.

Joffm wrote:
In my opinion you should use a question of type "equation" which you set to "1"

Id previous version work on 3.X but not on 4.X : someone can report the issue ? This can break a lot of survey.
Assistance on LimeSurvey forum and LimeSurvey core development are on my free time.
I'm not a LimeSurvey GmbH member, professional service on demand , plugin development . I don't answer to private message.